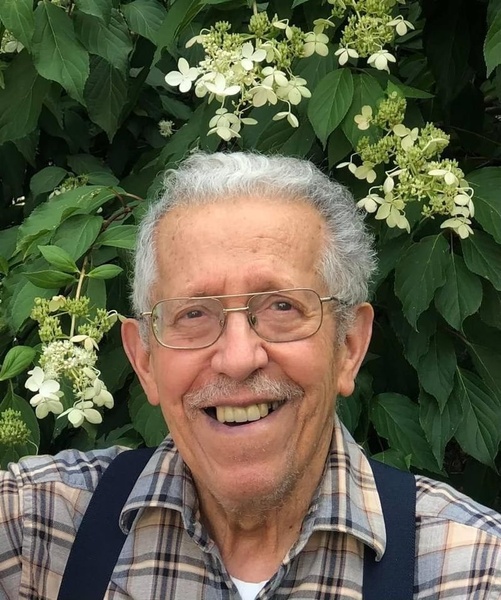 Antonio De Jesus Teixeira ("Toni") passed away peacefully at home surrounded by his loving family on Wednesday, December 09, 2020. Toni and his soul mate, his beloved wife Nair (Finzetto) Teixeira celebrated 63 years of a blessed marriage and settled in Stoughton in 1965 with their two children after immigrating to the US from São Paulo, Brazil.

Toni was born in 1928 on the Island of Madeira (Funchal, Ponta do Sol), Portugal, son of the late Antonio Rodrigues Teixeira and Adelaide (Coelho Da Silva) Teixeira. From there the family immigrated to Brazil when he was just two years of age. As freshly minted citizens of their new country, the family settled in the Bairro da Lapa, São Paulo.

Toni considered himself Brazilian in every way. He often described his youth as idyllic. Toni told of glorious carefree days playing "futebol" barefoot with soccer balls fashioned out of discarded socks, and of wondrous days exploring the banks of the (then) pristine Rio Tiete, in SP, often with his best friend Tininho. Toni had so many stories of his childhood escapades, including when his capsized boat prompted a very timely rescue by a single rower, forever endearing him to the sport of crew (rowing). He loved the hustle and bustle of the city of Sao Paulo. He enjoyed going to the outdoor neighborhood farmer's markets ("feiras" and "mercados"), and especially loved going with his dear brother and always with family for the midnight onion soup at the "CEAGE" (one of the biggest supply markets located in a huge hangar, know for its soup festival). Toni relished long walks around the different Bairros of the city with his brother David. Later he would do the same walks while carrying either of his young children on his shoulders, especially when visiting the grandparents.

Toni was a loving son to his mother, and he held in highest loving esteem his younger brother, David. Toni had a special place in his heart for Dona Maria (espanhola), a most kindly neighbor that treated him like a son. Toni fondly recalled the times he spent with his most beloved father, helping with the thirty heads of dairy cows the family raised, and when older, tending the counter at the family store. He cherished the memories of his dear kind father, who passed away suddenly when Tony was 19 year old. Subsequently he took over the responsibilities of running the family store. Toni also honored, admired and loved his in-laws, Antonio and Adelina Finzetto, as he did his own parents.

Toni fell head over heels for his "Nairzoca" when they were introduced to each other after a mass service at their local church and he walked Nair to her home. Toni promptly asked his future father-in-law for permission to court Nair and soon thereafter he asked for Nair's hand in marriage. They married one year later in July 1957 at Nossa Senhora da Lapa, the same church at which they met, and honeymooned in Rio de Janeiro.

Toni was educated in São Paulo, Brazil, with studies in business administration and accounting, graduating from the Escola Tecnica De Comercio "Campos Sales" and from the Centro Tecnico Do Trabalho. He was a small business owner in São Paulo for 17 years, managing his retail store at the same address as their home in Rua Catao, Lapa, SP. It was a lively hub for local residents and neighboring families, as Toni and Nair were a beloved couple with two children.

Toni did something very special when he made a life-altering decision to come to America, with the clear objective of establishing a new path for the benefit of his two children, and those generations that would follow. On May 31, 1965, the young family of four boarded the Rosa Da Fonseca at the port in Rio De Janeiro with all their worldly possessions packed into a few trunks and suitcases and $500 in Toni's wallet. Their ensuing two-week ocean journey included exciting stops in Recife, Brazil, and Barbados, along with dramatic days spotting whales swimming alongside and riding out 20-foot swells of a major storm in the waters off the Carolinas. The social highlight was timed with the crossing of the equator when crew and passengers all joined in the maritime tradition of honoring poseidon with a feast that included competitions of three-legged races and bobbing for apples, of which Toni and Nair were crowned champions! On June 14, 1965, they entered New York Harbor on a balmy, clear sunny day, slowly cruising past the Statue of Liberty at seemingly arms length, an emotional moment for all. Later that evening the young family stepped onto American soil for the first time and were soon headed to their new home on Prospect Street in what was then a very sleepy Stoughton. Since then Toni and Nair moved twice more within town, always nurturing respectful and cheerful camaraderie among past and current neighbors.

After relocating to the US, Toni immediately began working for Plymouth Rubber Company in Canton, MA and did so for about 15 years until the company closed. He was recognized for his work ethic and diligence in accomplishing his job. Subsequently Toni joined the Northrop Corporation in Norwood where he worked for about 10 years until his retirement in 1991. Even though he often worked 12 hour days, and often six days per week, his focus was on attending to Nair and their children, imbuing the home with love and kindness. Summer weekend drives to Scituate Beach, and Horseneck Beach, especially with the family of his cousin Manuel, were regular events. Hours were spent on the beach with coolers stocked with a kitchen pantry's worth of food or fishing on the breakers or collecting periwinkles for later treats at home, were all cherished activities. Long distance road trips in Toni's 1967 teal Chevy Impala to New York City, and to Niagara Falls were epic life time events for the family. Toni was the principal reason his son and daughter are bilingual, as he encouraged his children to speak only Portuguese at home, complementing that discipline with writing and reading lessons (as he also offered to his grandchildren). He is remembered for the patience, kindness, and joy he bestowed upon his children and grandchildren.

Toni proudly became a citizen of the United States, and was passionate about following U.S. and Brazilian politics. He had no tolerance for the guilty when hearing stories of political corruption or of irresponsibility with the public trust. Among Toni's last conversations were discussions in which he expressed his opinion of the importance of investing in the infrastructure of cities in order to help the quality and dignity of life for the workers.

Toni played the violin in his youth, kindling a life-long love of classical music, particularly of Beethoven's symphonies. He pursued other activities that were delightful to him such as sculpting wooden chess pieces, spending hours gardening and in the yard (Toni loved the summers), walking to town (up until just a few years ago) and playing chess. He taught himself basic French and almost tackled the German language. Toni loved singing Brazilian songs, especially the "classic" Carnival songs from his youth. At every gathering whether festively large or intimately small, he would break out in some song even if briefly, and enjoyed riffing spontaneous compositions to traditional melodies, often with humourous twists.

Toni was a prolific reader. For many years, he was a regular at the Stoughton public library to check out multiple books at a time, especially those dealing with the current issues of the times. During the late 1960's, Toni made a point to read every book on file at the Stoughton Library dealing with the Vietnam war, and developed an early opinion against the conflict, sharing openly that he believed it was going to be a big problem for the US. He loved to read his National Geographic Magazines, and took to enjoying the Reader's Digest for its pithy and easy to read stories.

Toni was an active parishioner at Immaculate Conception Church in Stoughton where he and Nair were among the founding members of the Stoughton Brazilian Community in the 1990's. He devoutly lived his faith through daily prayer, weekly mass, bible study, prayer groups, and as a lector regularly delivered the readings at Sunday services. Toni was a very active contributor and enthusiastic participant in Brazilian Catholic community gatherings and celebrations, attending with Nair always at his side, each and every event whenever possible, from simple coffee hours to group dinners and major feasts.

Throughout the past thirty years, Toni was instrumental in helping many Brazilians get settled after immigrating to the United States. He is described by many as a patriarch of the Brazilian community in Stoughton and the Immaculate Conception Church Social Group. Toni devoted himself to teaching English and serving as a translator in many settings, including hospitals, town halls, and government agencies to a multitude of community members. He and Nair opened their homes for friends and family, often hosting visitors from afar for weeks at a time. Dozens of children, and young adults in the Stoughton Brazilian Community revered Toni as a figurehead Grandfather, and in some cases as the actual God Father ("padrinho") in their respective holy sacraments.

Over the years Toni and Nair returned many times to visit the family and friends in Brazil. Each and every trip was a celebration, as the reunion ignited exuberance and joy with their gatherings. He and Nair also traveled to Europe, on occasions with Toni's dear brother David and his wife Nilda, and on pilgrimages to holy sites in Italy and France.

Toni's hearty laughter was delightfully contagious, he was quick to turn a phrase into a joke or pun, and always ready to embrace an old friend as well as a new acquaintance. Material possession held little sway over him, as he valued the qualities of the heart above all else. Toni had a great sense of humor, loved to laugh, and loved even more to get others to laugh with him. We hold dear and close to our hearts our fond memories of Toni's one liners, his infectious laughter, the exuberant singing, his many colorful stories and the great warmth and "carinho" he generously showered upon all of us.

In addition to his beloved Nair, our dear Toni is survived by his two children: Mario F. Teixeira and his wife Alison Fife, MD of Wellesley, MA and their children Samuel, Isabel and Benjamin; and Luciana T. Riggs and her husband David of Armonk, NY and their children Alexandra, Lauren and Kaitlin. Toni is also survived by his beloved brother David Rodrigues Teixeira of Sao Paulo, Brazil, David's esteemed wife Nilda Leni (Leone Reginato) and their children Luiz Antonio, José Carlos (m. Mariucia Ramos) and Maria Isabel (m. Julio Cezar Rodrigues). Toni loved Nair's family in Brazil, and cherished his brother-in-law Gilberto and his sisters-in-laws Wilde and Heydei, and their many children and their children's children. Tony cherished his many cousins in MA, CA, VT and the Island of Madeira, and the memory of his two departed sisters Laura R. Teixeira and Maria José R. Teixeira.

Donations in name of "Antonio De Jesus Teixeira" may be made to: Brazilian Community at Immaculate Conception Church 122 Canton Street, Stoughton, MA 02072

Last respects may be offered to Toni by the public on: December 18th, Friday, 4:00 pm to 7:00 pm at the Farley Funeral Home, 358 Park Street, Stoughton, MA. Visitors are asked to comply with CoVid protocols: ● Masks must be worn ● Keep distance of six (6) feet from one another. The funeral mass for Toni will be private. The Interment will follow the mass at the Holy Sepulchre Cemetery, Central Street, Stoughton, MA.