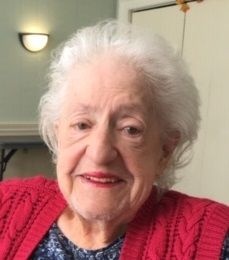 Cecilia E. (Dailey) Fiore, 99, a resident of Stoughton, died peacefully at Alliance Health at Marina Bay in Quincy on Thursday, May 16, 2019. She was the wife of the late Louis A. Fiore for over 50 years. Daughter of the late Michael and Mary Helena (Holdereid) Dailey, she was born in Boston and raised in Mission Hill. She was a graduate of Mission High School. Cecilia was a resident of Roslindale for 40 years and Scituate for 20 years. She was a homemaker. Cecilia was a great cook who also enjoyed Big Band music, dancing and gardening. She loved family parties and celebrations and traveling with her family.

Funeral will be held from the Farley Funeral Home, 358 Park St. (Rte. 27), Stoughton on Wednesday, May 22 at 9 AM followed by a Funeral Mass at St. James Church, Stoughton at 10 AM. Visiting Hours Tuesday from 4-7 PM. Interment will take place at Mt. Benedict Cemetery, West Roxbury. Donations in Cecilia's memory may be made to American Cancer Society, PO Box 22478, Oklahoma City, OK 73123.
To order memorial trees or send flowers to the family in memory of Cecilia E. (Dailey) Fiore, please visit our flower store.