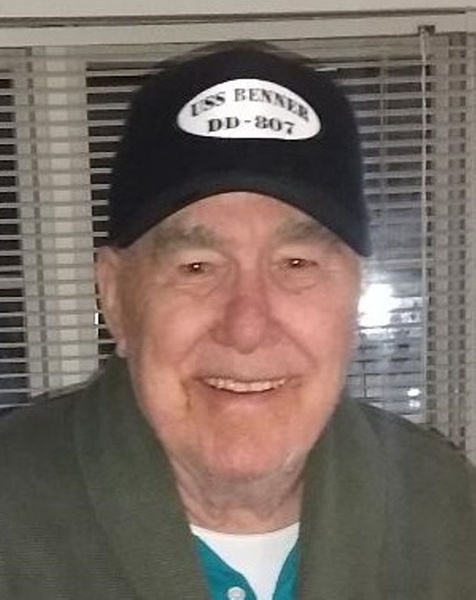 Charles W. Delaney, 88, died peacefully at home under hospice care on Wednesday, January 15, 2020 surrounded by loving family. Beloved husband of Loretta (Bushman) Delaney, son of the late Bernard and Ethel. Born in Boston, raised in Dorchester. Graduate of Dorchester High School for Boys and attended Massasoit Community College in Brockton. Signalman/QM2 in the U.S. Navy, serving aboard the USS Benner (DDR-807) as a Veteran of the Korean War. Resident of Stoughton for 45 years before moving to Easton. Charlie was a meat cutter for First National for 20 years then worked at Roche Brothers/Sudbury Farms at various locations until his retirement. He was also a part-time bartender at several different locations. Charlie was a member of the Amalgamated Meat Cutters and Butcher Workmen of North America, a lifetime member of VFW Post 1645 in Stoughton and the Tin Can Sailors. Proud member of the Originally From Dorchester Men's Club (OFD). He enjoyed playing cards, especially Blackjack, dog racing, trips to Foxwoods, visiting with his grandchildren and was also a big history buff.

Funeral will be held from the Farley Funeral Home, 358 Park St., (Rte. 27) Stoughton on Tuesday, January 21 at 9 AM followed by a Funeral Mass at Immaculate Conception Church, Stoughton at 10 AM. Visiting Hours Monday from 4-7 PM. Interment at Knollwood Memorial Park, Canton.
To order memorial trees or send flowers to the family in memory of Charles W. Delaney, please visit our flower store.
Send a Sympathy Card