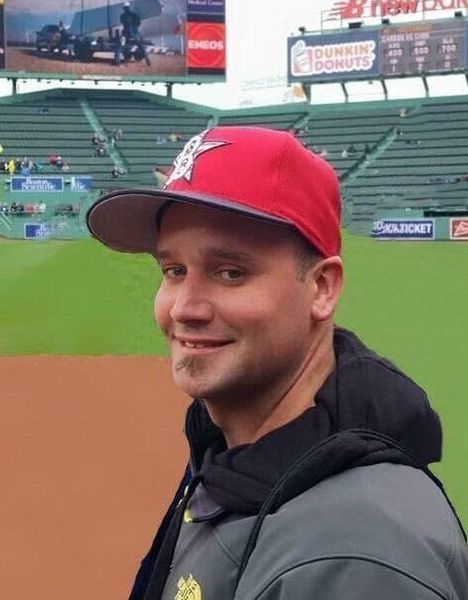 Christopher W. Bisbee, 36, a longtime resident of Stoughton, died Wednesday, November 28, 2018. He was the husband of Katie M. (Jolley) Bisbee of Stoughton and the son of Richard J. and Suzanne (Boudreau) Bisbee of Canton. Born in Boston, Chris was raised and educated Stoughton and was a graduate of Stoughton High School, Class of 2001. While at Stoughton High, he played Soccer and excelled as a Pitcher in Baseball. He continued playing Legion baseball for several years. A Friend of Bill W., he worked at MedLine in Mansfield for several years. Chris was a loyal and loving friend who enjoyed spending time with his friends. He enjoyed sports, collecting baseball cards and shopping. Chris loved vacationing in New Hampshire, especially snowmobiling in the winter, enjoying the foliage in the fall and fishing in the summer. He also enjoyed spending time on Cape Cod, working on cars and home improvement projects and his dog Ace. Above all, Chris loved his family and enjoyed spending time with his children.

In addition to his wife and parents, he is survived by his twins, Ava Helen Bisbee and Jacob Joseph Bisbee of Stoughton. Chris was the brother of Richard T. Griffin and his girlfriend Jillian Kostka of Dennis, Ryan M. Bisbee and his girlfriend Amanda Patterson of Canton and the late Joseph R. Bisbee. Chris was the son in law of Kathleen Jolley of Stoughton and the late Michael Jolley. He is also survived by several nieces and nephews.

Funeral will be held from the Farley Funeral Home, 358 Park St., (Rt. 27) Stoughton on Tuesday at 9 AM followed by a Funeral Mass at Immaculate Conception Church, Stoughton at 10 AM. Visiting Hours Monday from 5-8 PM. Interment will take place at Evergreen Cemetery, Stoughton. Donations in Chris' name may be made to the Bisbee Children's Fund, PO Box 93, Stoughton, 02072.
To order memorial trees or send flowers to the family in memory of Christopher W. Bisbee, please visit our flower store.
Send a Sympathy Card