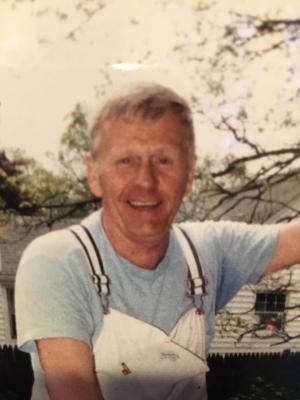 James Kenneth Fisher, age 93, of Stoughton, MA died peacefully at the Copley at Stoughton on Tuesday, May 5, 2020. Jim was raised from infancy by grandparents, aunts and uncles and then put into Boston foster care until age 16 when he was reunited in Stoughton with his mother, Dorothy M. Selig Fisher Turtlotte and stepfather, James Turtlotte, a lather by trade. His natural father, Robert Leander Fisher and mother Dorothy M. Selig both immigrated to Boston from Bridgewater, Nova Scotia. The Fisher's Nova Scotia heritage (beginning in 1752) is still on view in Bridgewater, also the town's original high school building that was built by Jim's grandfather, Walter Kenneth Fisher and his crew.

Jim worked for his stepfather James until he was old enough to enlist in the Navy and was honorably discharged at the end of WW2. Upon returning to Stoughton, he married his childhood sweetheart, "Trish" (Patricia Winfisky of Stoughton) and they raised 2 children. They were members of The Immaculate Conception Church in Stoughton for decades and both children attended St Mary's School.

After his career as a commercial lather, Jim worked in building and maintenance at the Goddard Memorial Hospital for approximately 42 years. He was a good friend of Goddard's professional, medical and administrative workers.

Jim loved his family and the outdoors. He hunted deer in Maine with bow and rifle, and bird hunted with Rip, his companion Brittany Spaniel, in rural Stoughton/North Easton. He was also an active member of The Avon Bowmen, taking a first-place championship in 1945. When his children were grown with homes of their own, he did countless carpentry projects for them, traveling to Connecticut and Texas and asking only for their love. He was truly a model husband, father and Stoughton townsman.

He leaves his wife of 69 years, Patricia A. Winfisky Fisher, also resident at the Copley at Stoughton, his children, Linda Patricia Fisher Clement and her husband Edward S. Clement of Thompson, CT and Michael Edward Fisher and his wife Natalia M. Fisher of San Antonio, TX, grandson, Jason Daniel Fisher of Yancy, TX and 2 great granddaughters, Madison and Makenzie Fisher of San Antonio, TX. He is also survived by a niece, Rosemarie Winfisky Bazinet and husband, Robert, great nieces, Michelle Butler and Sherilyn Dickerson, and their children, Luke and Jackson Jones and his dear, caregiver, Kelley Palma of Stoughton.

Private services and burial will take place in Texas. This fall, there may be a Celebration of Life in Stoughton. Anyone interested in an invite: email linda423@charter.net

Donations in Jim's memory can be made to Boston Children's Hospital Trust, 401 Park Drive, Suite 602, Boston, MA 02215. (http://giving.childrenshospital.org/)
To order memorial trees or send flowers to the family in memory of James Kenneth Fisher, please visit our flower store.