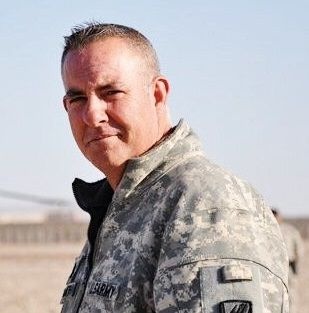 John A. McCarthy, SFC US Army, a resident of Dover, formerly of Stoughton, died peacefully at Brigham & Women's Hospital in Boston on Sunday, May 5, 2019 surrounded by his loving family. He was the husband of Lori J. (Smith) McCarthy, of Dover, formerly of Needham. Son of John F. McCarthy of California and the late Mary H. (Wickenhiser) McKenzie. Step-son to Helen McCarthy. He was born and raised in Stoughton. John was a graduate of Stoughton High School, Class of 1982. He joined the US Army Reserves in 1982 and then served active duty in the Army from 1989-1997 before rejoining the Reserves where he served until his passing. He was deployed seven times between Iraq, Afghanistan and Kuwait during his time in the Army and achieved the rank of E7 Sergeant First Class. He was also a social worker for the Commonwealth of Massachusetts for several years. John was active with the Wounded Warrior Project. He was an avid Boston sports fan and loved the beach and ocean.

In addition to his wife and father, John is survived by his children, Johnathan McCarthy of Illinois and Elizabeth McCarthy-Beyer of Middleboro along with step-children Meghan Hall and Rachel Hall both of Dover. He was the brother of Lisa Black and Timothy McCarthy both of Stoughton, Mary Ojala of Middleboro, Anne Carberry of Milton, Thomas McCarthy of E. Bridgewater and Caroline Mitchell of Rowley. He was the step-brother of Julie King of California. He is also survived by many loving nieces and nephews.

Funeral Service will be offered from the Farley Funeral Home, 358 Park St. (Rte. 27), Stoughton on Tuesday, May 14 at 11 AM followed by interment at Sharon Memorial Park, Sharon. Visiting Hours Monday from 4-7 PM. Shiva will take place at Ilisa Clark's home, 60 Linden St., Wellesley on Wednesday from 5-8 PM. In lieu of flowers, donations in John's memory may be made to the Wounded Warrior Project, PO Box 758517, Topeka, KS 66675-8517.
To order memorial trees or send flowers to the family in memory of John A. McCarthy, please visit our flower store.