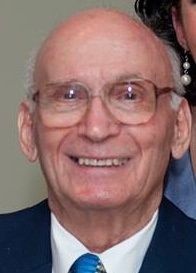 Joseph A. DeMarco, 93, a longtime resident of Avon, died peacefully at the Life Care Center of West Bridgewater on Tuesday, August 6, 2019. He was the husband of Irene (Tully) DeMarco for 70 years. Son of the late Angelo and Gertrude (Cobb) DeMarco, he was born in Boston and raised in Roxbury. Joseph was a Seaman 1st Class in the U.S. Navy and a Veteran of World War II. He was a resident of Avon since 1953. Joseph was the Superintendent of Maintenance for the Senior Housing in Avon for 17 years before retiring in 1989. He was an active performer with the South Shore Variety Show Troop with his friend Gerry Peterson, Retired Avon PD.

In addition to his wife, Joseph is survived by his daughter Susan Garvin and her husband Jerome of Easton, as well as his grandchildren, Janet (Kibbee) Lind and her husband Dan and Paul Kibbee and his great-grandchildren, Logan Lind, Brianna Kibbee and Victoria Kibbee. He was preceded in death by several brothers and sisters and is also survived by many nieces and nephews.

A Memorial Mass will be held at St. Michael Church, 87 North Main Street, Avon on Friday, August 23 at 10 AM. Interment will take place at Massachusetts National Cemetery, Connery Avenue, Bourne on Monday, August 26 at 12:30 PM. In lieu of flowers, donations in Joseph's memory may be made to Old Colony Hospice, 321 Manley St., W. Bridgewater, MA 02379.
To order memorial trees or send flowers to the family in memory of Joseph A. DeMarco, please visit our flower store.
Send a Sympathy Card