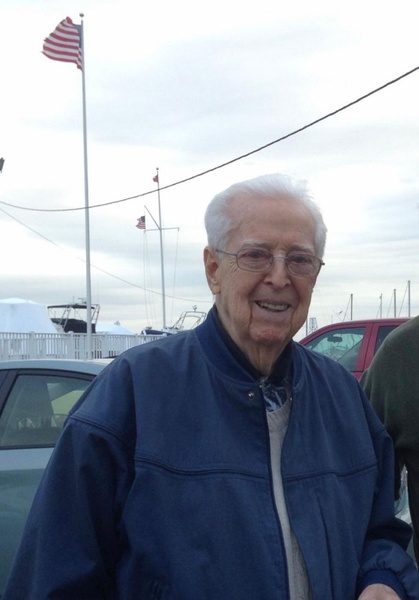 Leo F. Horan, 95, a longtime resident of Revere, died Monday, July 1, 2019 at the South Shore Hospital in Weymouth, after a period of declining health. Born and raised in Stoughton, son of the late William T. and Madelyn (Schwartz) Horan, he was a graduate of Stoughton High School, Class of 1942. In April of 1942, he enlisted in the US Navy and served in Newport, RI, until contracting Rheumatic Fever in August of 1942. Told he had 3 months to live, he was Honorably Discharged and sent home to Stoughton. Much to the surprise of the US Navy Medical staff, he survived and lived 77 more years. Following his recovery, Leo continued his education at the New England Conservatory of Music and earned his Bachelors Degree in Music specializing in Classical Music, in 1950. Leo loved music and enjoyed playing the piano. He worked for Cooper-Jarret and Teamsters Local 25 in Boston for over 30 years, retiring in 1982. While retired, Leo became interested in the Stock Market and enjoyed researching companies and day trading stocks. Despite several of his requests, the Boston Globe and Wall Street Journal both declined to increase their font as Leo's age increased and eyesight declined. He enjoyed wintering in Fort Lauderhill, FL. Leo spending holidays with his nieces and nephews and loved to get a good bargain.

Mr. Horan was the brother of Helen Ball of Stoughton and the late William P. Horan and Edward T. "Red" Horan. He was the uncle of Madelyn White of CA, Raymond S. Ball of MD, William T. and Edward T. Horan, Jr. of Stoughton, Mary Elizabeth Horan of KY, James M. Horan and Peter G. Horan of Easton, Daniel P. Horan and Ruth M. Nelson of Brockton and Regina Dallaire of Sharon. He is also survived by many great nieces and nephews and great-great nieces and nephews.

Visiting Hours will be held in the Farley Funeral Home, 358 Park St. (Rte. 27), Stoughton on Monday, July 8 from 9:30-10:30 AM followed by a Funeral Mass at Immaculate Conception Church, Stoughton at 11 AM. Interment will take place at St. Joseph's Cemetery, W. Roxbury. Donations in Leo's memory may be made to the New England Conservatory of Music, 290 Huntington Ave., Boston, MA 02215.
To order memorial trees or send flowers to the family in memory of Leo Francis Horan, please visit our flower store.
Send a Sympathy Card