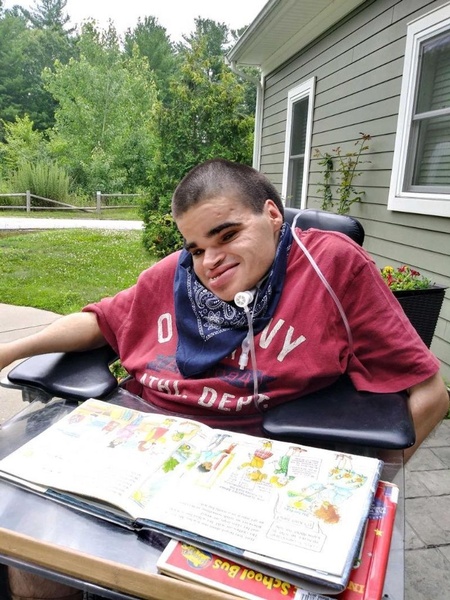 Nathaniel V. Casemiro, 33, entered into eternal rest Christmas Eve, December 24th, 2021 at Morton Hospital in Taunton MA. He was the son of Margaret "Peggy" Chace and the late Raymond "Ray" Casemiro of Stoughton. Nathaniel was born with numerous congenital anomalies and birth defects that he struggled with every day. His strength and perseverance were his trademarks and despite his physical challenges, he was a bright light that entered every room and touched the lives of many.

He was a resident of South Eastern Residential Services group home in Taunton where his nurses, and staff were his a second "family" who treated him with dignity and respect daily. He was often referred to as the "Mayor" since he knew everything going on in his house. Nathaniel was a former resident and graduate of Mass Hospital School in Canton. Prior to that he lived in Milton and attended Elementary School alongside his nurses. He was known for soaking up the sun, playing Wheel of Fortune, his love for books, the Wizard of Oz, the Muppets, and enjoying musicals like Annie. He enjoyed spinning around in his motorized wheel chair and almost running people over jokingly. Nathaniel loved the color red and anything and everything he owned had to be that color. He was known for his love for food. Mashed potatoes and gravy and his treats were among many of his favorites. He enjoyed his outings to the library, bowling, and musical performances. Nathaniel played his cards close to his chest, but those who knew him knew how smart he was and how he never missed a beat.

In addition to his mother, he is survived by his Godparents, Maureen and "Uncle" Larry Gilbert of N. Chelmsford and their children, his siblings of the heart, Hannah and Zach Gilbert. He is survived by his aunt and uncle, Christine and Billy Lima of Stoughton and his cousins Brandon, and Adriana Lima and Christian Chace. He leaves behind his "Granny", Karen Smith of Taunton, along with all the nurses who took care of him over the years.

Visiting hours will be held in the Farley Funeral Home, 358 Park St. Stoughton on Friday from 10:00 to 12:00, followed by his service. Burial will follow at Evergreen Cemetery, Stoughton.
To order memorial trees or send flowers to the family in memory of Nathaniel V. Casemiro, please visit our flower store.