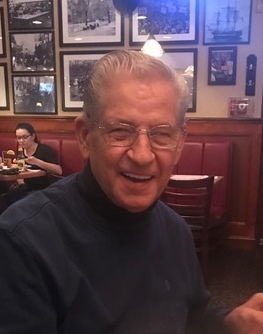 Raymond A. Schiffer, 79, of Stoughton, passed away peacefully at the Good Samaritan Medical Center in Brockton on July 26th after of period of failing health. He was the loving husband of Eleanor R. "Ellie" (LaMattina) for over 61 years. Raymond was born in Boston and educated in Boston schools. After high school he entered the National Guard and then worked at Hanlon Shoes in Braintree for 50 years. He also worked for Red Wing before retiring. Ray was an avid sports fan. He loved to socialize, play Keno, work in his tomato garden, spend time at Nantasket Beach and was often quoted as saying "I'll be back by 2pm." More than anything, Ray loved spending time with his family, especially his grandchildren and great grandchildren.

Funeral services will be private. Donations in Ray's memory may be made to The Make a Wish Foundation, One Bulfinch Place, 2nd Floor Boston, MA 02114.
To order memorial trees or send flowers to the family in memory of Raymond A. Schiffer, please visit our flower store.