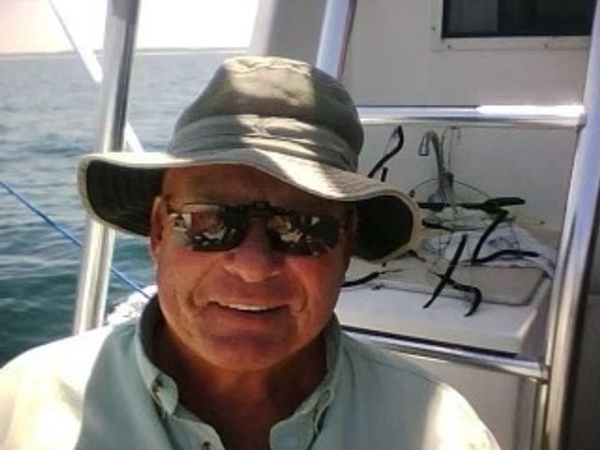 Walter F. "Wally" Unda, left for new fishing grounds on Thursday, July 14, 2022, just days shy of his 81st birthday. Son of the late Joseph and Lamberta Unda, he was a resident of Milford NH, and a long time resident of Stoughton, Massachusetts. He was the owner of Unda's Bus Service and Interstate Coach until his retirement. Wally was a maverick in the bus transportation industry, holding many leadership positions in local transportation associations. A 1959 graduate of Stoughton High School, Wally attended Brown University and was a member of Sigma Chi. He left Brown to assist his father in the family business. The original Bluefin Tuna Boat Captain, he could be found most weekends on the southwest corner searching for the next big catch. President of the Cape Cod Tuna Club for many years, he enjoyed the camaraderie of the fishing community and raised many generations of fishermen and women. His largest bluefin tuna was caught on his boat "Kembe" by his favorite son, Richard, weighing in at 973 pounds (the fish, not Richard).

Over the last years of his life, Wally focused on maintaining his health. Like a gladiator, he took on the healthcare system, in multiple states. He tortured, we mean challenged, many medical professionals, including doctors, nurses, receptionists and CVS employees. To the thousands of healthcare professionals who met Wally, we thank you for your patience, humor and kindness. Wally was a life long learner and a curious being, who asked a million questions and was sincerely interested in other people. He was a surrogate father to many, in particular, his sister, Denise Costa and his cousin, Joseph Wozniak. He welcomed everyone aboard his vessel and was famous for his late night life talks, which may or may not have included a drink or two. On July 4, 1961, on the Esplanade in Boston, he caught the best catch of his life, Donna A. Burton. She would go on to become his wife of 59 years and also the holder of the world's record for having the patience of a saint.

He is survived by his loving wife, Donna A (Burton) and his 3 amazing children: first mate and number 1 son, Michael J. and his fiancé, Judi Doyle-Kaplan of Buzzard's Bay, second mate, Richard J. and his wife (the official last spouse standing), Maria O'Connell Unda, of Bridgewater, and his beloved daughter, #2 on speed dial and Donna's best friend, Tracey Bradshaw of Nashua, New Hampshire. Wally is also survived by his sisters, Carolyn Rogers and Denise Costa, both of Oregon. He was adored by his grandchildren: Ronan and Rylee Bradshaw of Nashua, New Hampshire, Joseph and Colleen Unda, both of Brooklyn, New York. Edward (Fast Eddie) Unda of Hyannis, Claire Strauel (husband James) of New York and great grandson, Theodore Austin Strauel. A willing and enthusiastic participant in all family and extended family events, he will be missed by many nieces, nephews, cousins and friends. Wally loved a quote by Hunter S. Thompson, which he edited to reflect his own life: "Life should not be a journey to the grave with the intentions of arriving safely in a well preserved body, but rather to skid in sideways, tuna rod in one hand, B&B in the other, body thoroughly worn out and screaming, 'Woo Hoo What a Ride!'" Thanks for the great boat trip Wally. We'll see you at the H buoy. Services will be private.
To order memorial trees or send flowers to the family in memory of Walter F. Unda, please visit our flower store.